Hey everyone! Hope you’ve all been enjoying the Opus XII: Crystal Awakening reveals so far! This week I want to show off a card that many of you have likely seen the art for already, since it’s been here on our website, Bartz 12-052H! It features original artwork by Yukihiro Kajimoto, popularly known by Square Enix fans for their illustration work with the Star Ocean series. Let’s have a look at the regular card and the full art side by side! 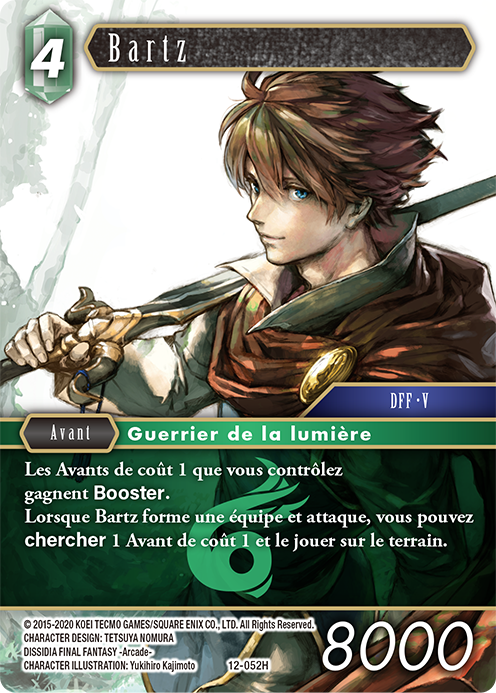 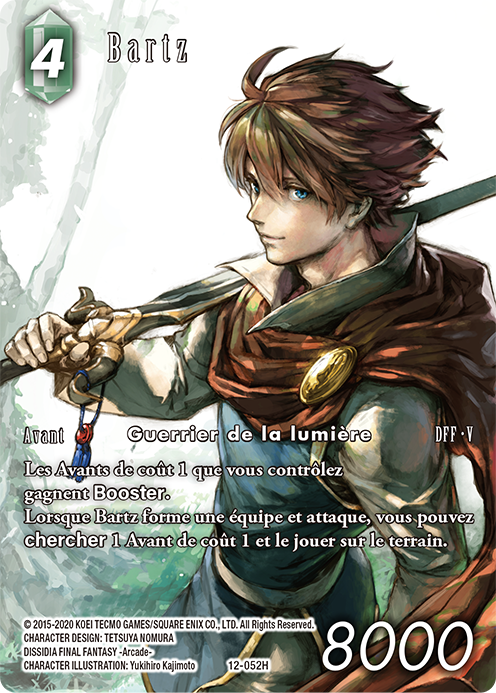 What an absolutely gorgeous illustration! Easily my favorite Bartz illustration to date, and I love how the very simple background gives this impression of a hero heading into a bright new adventure.

This Bartz is a 4 CP, 8000 power Forward with job Warrior of Light. He has a field ability that reads “The Forwards of cost 1 you control gain Haste.” He also has an auto ability that reads “When Bartz forms a party and attacks, you may search for 1 Forward of cost 1 and play it onto the field.” Hm, so this Bartz likes to play around with 1 CP Forwards huh? There are a lot of Chocobos in Wind that are 1 CP, but… I shared them already in my Yuna article… I can’t exactly repeat them. I guess I’ll just have to share a new one. 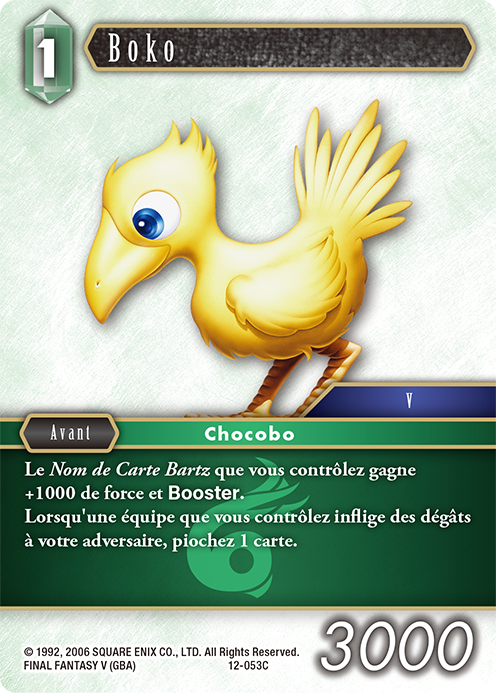 That’s right! Bartz’s #1 buddy, Boko, is headed to FFTCG in Opus XII! Not only that, but this Boko plays REALLY well with this Bartz. Boko

[12-053C] Boko is a 1 CP, 3000 power Forward, with Job Chocobo. He has a field ability that reads “The Card Name Bartz you control gains +1000 power and Haste.” Oh, so Bartz and Boko give each other Haste! He also plays off of the party attack theme with his 2nd auto ability, which reads “When a party you control deals damage to your opponent, draw 1 card.”

Like I mentioned, we’ve already talked in the Yuna article about Party Attack decks, and even some Chocobo cards, but I’d like to mention some 1 CP Forwards that could be options with Bartz and Boko. Zack

[11-007R] Zack is the most recent that comes to mind. An 8000 power Forward with Haste can be pretty intimidating, especially if you get to play it for free from Bartz’s ability. I also like the idea of using Deuce

[9-052C] Deuce, despite Bartz and Boko not being Class Zero Cadets. Her field ability giving your Forwards +1000 power can be a nice addition boost when Bartz party attacks. Lastly, I definitely have to mention Snow

[1-132C] Cait Sith for largely similar reasons. Snow can get you an additional attack slipped through after Bartz’s Party Attack, or, if using Cait Sith, you can dull an opposing Forward before they even have the opportunity to block Bartz’s party, and Cait Sith can follow up immediately after if the coast is clear.

[2-132C] Viking as support. There hasn’t really been a “1 CP” theme before, so I’m excited to see the ideas people might come up with for Bartz and Boko!